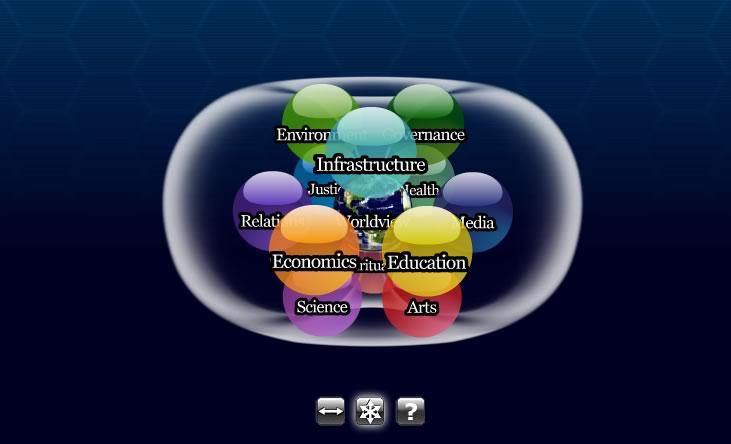 On November 11, 2011 (11.11.11), the much anticipated Thrive film and website premiered at locations worldwide.  The premiere of the Thrive film and website is significant, as these media are perhaps the most comprehensive and compelling forms of media (so far) communicating one of the most important messages in the history of humanity.  I highly recommend that you take a look.

It’s also significant for me as an experience designer, as I’ve been involved, over the past few years, in working with the Thrive team to co-produce a key and unique aspect of the website: the “Sector Navigator / Resource Tree”.   The Sector Navigator is an interactive, multi-colored, 3-dimensional, Vector Equilibrium interface designed to allow people to navigate the 12 major sections of the website.  The Vector Equilibrium geometry (also known as the VE, dymaxion, and cuboctahedron) is also a key topic of the film.  The Resource Tree is an interactive interface for “drilling-down” into specific content of each major sector, and is designed with an organic, “fern frond” aesthetic.  The Sector Navigator and the Resource tree operate as a single UI affordance on the Thrive website.

A special “mandala” version of the Thrive VE map I made:

A Brief History with VE Design:

Many years before being enrolled to create this Thrive Vector Equilibrium interface, I was first introduced to the VE geometry by Nassim Haramein (who happens to be in the Thrive film) while attending his presentation on unified field theory physics (and more) in San Rafael, California in 2001.  At one point during the mind-blowing 12 hour presentation, I specifically recall Nassim making a general reference to the Vector Equilibrium geometry as an type of “very significant interface”.  That’s all I needed to hear–as somehow, that moment of seeing the geometry of the Vector Equilibrium and hearing Nassim refer to it as a type of “interface” really caught my attention.  After the presentation, I was so inspired by the notion of the Vector Equilibrium that I set out immediately to create it in an interactive, digital form.  Then, and over the next 7 years (off and on), I experimented with representing the VE in various ways, with various purposes of information design and user experience design.  One such way was by programming the 12 vertex points of the VE geometry (distributed in Cartesian space) to correspond to red, green, and blue color values–which allowed for a natural “rainbow coloring” of the overall VE space, and a specifically calibrated and unique color for each point / sphere of the VE interface.  I posted an example of this on the front page of my personal website in 2007.

Then, later in 2007, during some of the initial planning conversations with the Thrive team, I introduced my VE examples, which included the general notion of color-coordinating the VE geometry in this way.  And thus began our collaborative work of creating the Thrive VE Sector Navigator as the world is now seeing it today.

Also, as destiny would have it, in 2008, 7 years after being introduced to the Vector Equilibrium by Nassim Haramein, I would be synchronistically guided to visit the Resonance Project in Hawaii, where I showed Nassim the work I had done with the VE, and was then subsequently invited to become a member of the community project, and enrolled to create some special software based on the VE geometry.

The 3-dimensional “rainbow space” configuration, as I call it, also became an integral part of the design of my CogSpace project in 2009.

Over the last few years, I’ve also been creating some even more unique and compelling interface models based on the Vector Equilibrium geometry and “Rainbow Space”.  Keep an eye on this blog, Mythic Systems, and and/or the Rainbow Space FaceBook page for updates very soon.