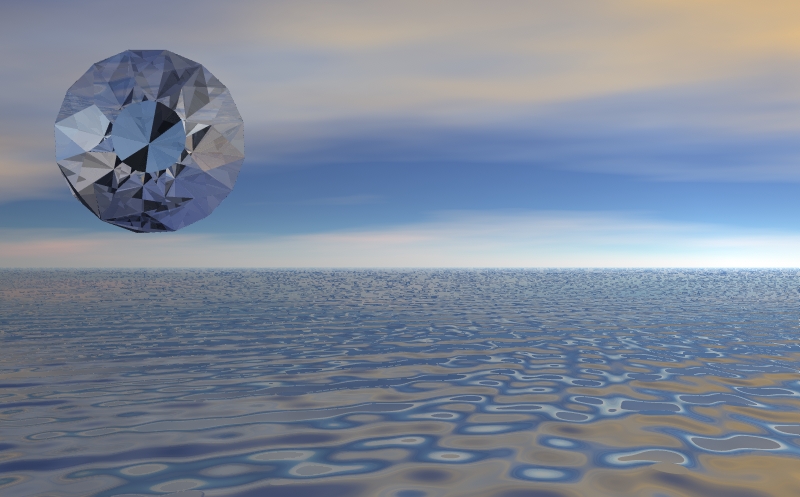 Diamonds are forever. Are you ready to live with the clarity, brilliance, and high value of such a perfect gem–and then literally pass it on to future generations … forever? According to an article at BBC News, you will.

The current trend of digital storage technology is about to go vertical. In just a few years, advents of digital storage and recording devices will be available to document our entire lives in perfect audio and video–continuously (24/7/365). We will then pass forward the high-defination and intelligently organized content of our collective lives into an indefinite future.

Currently, anyone with about $600 can go out and buy a Terabyte hard drive. Many current cellphones and PDAs also have ample storage capacity, as well as audio and video recording. We can extrapolate the current trends toward a near future where nearly everyone will be able to have enough storage capacity, and the devices in their hands to nearly effortlessly record their entire lives. As the author of this article suggests, we are on the brink of entering into real history:

“We’re only a few years away from the cost of data storage dropping so far that we can record ‘everything’ that happens to us: our location at any given time, what we are hearing, what we are seeing, and what we are saying or doing.”

“For the first time ever, the human species will have an accurate and unblinking, unvarnished view of its own past as far back as the dark ages of the first decade of the 21st Century, when recorded history ‘really’ began.”

Think about it: we lack nearly any accurate rendering of human history from 1000 – 2000 years ago (just a couple of old scrolls and stone tablets). I’ve seen perhaps a few dozen black-and-white photographs and have read only a few texts that were created only 100 years ago. When I look at my family photo albums, the images are tinted yellow, and appear just about as old as the scrolls of ancient Sumeria. From when I was between 3 – 5 years old, there is about a minute of recorded film (with no audio, of course). Fortunately, I was an avid journal keeper–and I now have a stack of about a dozen or so hand-written journals on my book shelf that loosely document my life from 18 onward. Today I take lots of photos and keep a blog (and yet, since entering my 30’s, I’ve become increasingly less concerned with recording the content of my life as opposed to investing time into generating new content of life). Interestingly, in just a few more years, I will be able to record just about everything in multimedia detail, while not needing to become overly concerned with the technical process of it. Even more, as overall information technologies continue to advance, all of my personal life content will be automatically indexd and organized for very efficient recall and cross-referencing.

“With your phone converting all the speech it hears to text (and storing that, too, and indexing it by time and location it becomes possible to search it all – like having Google for your memory.”

Once we pass into this technology paradigm, the process of collectively generating an impeccably detailed, broadly diverse, and long-lasting multimedia record of collective history will continue to evolve in its methods, means, and implications. As storage mediums get increasingly granular and smaller in size while simultaneously growing greater in capacity–we will approach another threshold: molecular and atomic archiving. Eventually, we will be able to record binary code at the molecular and even atomic scale.

One gram of this substance could store 10 to the power 21 bytes (887,808 petabytes) – the equivalent storage of more than 11 billion typical PCs.

If we can figure out how to read and write data on the atomic scale, you could store the sum total of all the data we recorded in 2003 on a grain of sand.

Using nanoscale diamond as data storage, six hundred grams (about one and a quarter pounds, if you’re my generation) can store a lifelog, a video and audio channel, with running transcript and search index, for six billion human beings for one year.”

Sand, glass, crystal, and diamond could make very good storage substrates as they are each carbon/silicon based chemical structures with highly calibrated molecular symmetry matrices and optimal transparency (for optical read/write methods). Given that modern scientists have somewhat recently ushered us into the “New Diamond Age“, having invented methods for artificially growing synthetic diamonds in a lab, a next reasonable step will be to invent a way to “burn” a diamond (just as we now “burn” a CD with lazer) with the content of petabytes of knowledge and experience. Once a diamond is “burned” with data at the atomic scale, it will essentially last for millenniums and beyond.

I find the implications of this coming revolution in collective memory incredibly inspiring:

Imagine a day when dust sized nanobots drift through the air of your living room capturing audio and video (in super-high resolution) of every experience from multiple views of perspective, instantly logging with impeccable detail every nuance of experience and the environment into a super-intelligently organized hyper-array within a ubiquitous and transparent global communications network. Combine this with the inevitable advents of semantic systems and ontological engineering, and suddenly–life itself becomes far better than movies (YouTube gone toroidal)!

But what about security and privacy? Of course these are the most obvious concerns–and will be magnificent hurtles to overcome along our way to match social and spiritual evolution alongside the progressive strides of such technology [link here to future blog page on the archetectonic issue of human security and it’s spiritual, psychological, philosophical, and technological correspondents].

Given that we do move though the coming bottle neck of social evolution and the environmental challenge–imagine a time centuries from now when it will be a common tradition for all people to review the moment of their birth–re-experiencing that potent and original moment with incredible and sensible detail. Future historians can render composites from vast resources of archived content into a life-like virtual reality (hello HoloDeck). They will interactively explore reconstructions of very specific moments in history, taking note to nuances that we may take for granted today. Everybody will be accountable and truly recognized for every small or great contribution (or lack of contribution) in their entire lifetimes. Each person may realize a uniquely compelling sense of presence and responsibility within the powerful scope of a collective witnessing to their every action–a witnessing shared not just by billions in an instantly networked global community in local time, but also for countless future generations. This aspect alone may contribute significantly toward a holistic integration of personal/collective psychology, result in a much greater sense of fulfillment while living life (feeling a deeper sense of security that your time well spent will be remembered), and be a key element in resolving the psychological problem around death. At the end of people’s lives, the very best moments, contributions, and messages are transferred onto a “hyper-diamond”, and then placed with the family gem collection, or passed along to kin as a diamond ring or pendent (where stories and experiences of the family lineage are continuously added).

Take into perspective that organic diamonds formed from oily carbon refuse of ancient plants and dinosaurs hard-pressed under tons of rock and eons of time into the most endurable and valued of gems today. Now again we cross a threshold of time into a new eon: where the dinosaurs of our gigabyte hard-drives full of photos, videos, and blogs will soon be placed within the vast archives of a complete composite of our unique stories. All that we say and do over the next few decades will, perhaps, even become mythologized onto the very atoms of a glimmering hyper-diamond–brilliantly cut with the multifaceted perspectives of a shared human legacy of immeasurable value.

Shine on you crazy diamond …

And keep an eye out for Lucy in the sky …

Collective IntelligenceconsciousnessevolutionfutureinnovationinternetmediaPsychologyspiritualityTechnologytimetranshumanismtransparency
About the author

Collective Consciousness : there’s an app for that!
January 23, 2014